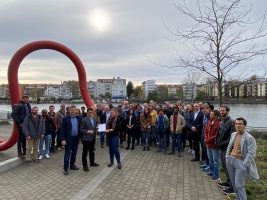 The Meter-wavelength radio astronomy community in Germany is organized in the German Long Wavelength Consortium (GLOW). One particular priority of GLOW is the operation of the German LOFAR stations. LOFAR is the world’s largest low-frequency radio telescope and will remain so for the foreseeable future. It is currently undergoing a transition to LOFAR2.0, which was a good moment for ECAP members Prof. Jörn Wilms and Prof. Anna Nelles to join, in particular by jointly operating the LOFAR station in Unterweilenbach (near Pfaffenhofen) with the University of Würzburg and the Max-Planck-Insitute in Garching. Formally joining the GLOW consortium during their last annual meeting just solidifies this extension of the ECAP multi-messenger and multi-wavelength coverage.