From Russia to the Mediterranean 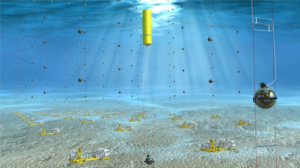 Artist's impression of the KM3NeT/ORCA detector which is under construction at the bottom of the Mediterranean Sea. More than 64000 optical sensors will detect the faint blueish Cherenkov light induced by secondary charged particles that are created in collisions of neutrinos and water molecules.
25/03/2019

An international team of 90 researchers, including Dr. Jannik Hofestädt and PD Dr. Thomas Eberl from the Erlangen Centre for Astroparticle Physics, has published a letter of interest to build an ambitious new experiment that would involve firing neutrinos from a particle accelerator in Protvino, Russia, to the KM3NeT/ORCA detector 2595 km away at the bottom of the Mediterranean Sea.

Neutrinos are fundamental particles that are created in huge numbers by cosmic sources such as the Sun but can also be produced by nuclear reactors and particle accelerators. As they interact only weakly with matter they are difficult to detect and large volume detectors are needed. There are currently three known types of neutrinos that can oscillate between their different “flavour states” as they travel, a phenomenon that shows that neutrinos must have finite rest masses. Scientists, however, have not yet been able to determine the relative ordering of the three neutrino masses as well as to discover the extent to which neutrinos violate charge-parity symmetry — a finding that could help to understand why the Universe is dominated by matter rather than antimatter.

The proposed new European long-baseline facility could be a successor in the 2030s to similar facilities such as T2K, NOvA, DUNE and Hyper-K in the US and Japan which are currently operating or in the planning stage. It would require the funding and construction of a new neutrino beamline, aligned towards the ORCA site, as well as a substantial upgrade of an existing accelerator complex 100 km south of Moscow to boost its proton beam power to at least 90 kW. It may also require an upgrade to the ORCA water Cherenkov detector, which has been designed to detect atmospheric neutrinos and is still under construction.

Scientists from ECAP have been strongly involved in the design of ORCA, as well as in the evaluation and optimization of the physics potential of the proposed new long-baseline facility. The new experiment has been proposed for inclusion in the upcoming update to the European strategy for particle physics and has substantial support within the particle physics communities in Europe as well as in Russia.