The Cherenkov Telescope Array (CTA) will be the largest ground-based gamma-ray experiment ever built. It will consist of more than 100 telescopes in total and be constructed at two different sites, one on the Northern Hemisphere (La Palma, Spain) and one on the Southern one (Paranal, Chile).

CTA uses the imaging atmospheric air shower technique to study photons of the highest energies. Gamma-rays are detected by observing the Cherenkov radiation that is emitted by charged particles in the air shower that is initiated when the gamma-ray hits the atmosphere of the Earth. The telescopes employ large mirrors to collect the Cherenkov photons and fast cameras to register them.

For more information, you can visit the project webpage, check out the CTA image gallery, or follow CTA on Twitter.

At ECAP, we are involved in the development of both software and hardware components for CTA. On the hardware side, we work on camera systems for two telescope types and perform test measurements of the telescope mirrors. Furthermore, we help to develop new software packages for the analysis of data that will be collected by CTA.

Development and production of photosensor modules FlashCam is a concept for the camera of the Medium-Size Telescopes (MSTs) of CTA. At ECAP, we are involved in the optimization, testing, and production of the photosensor modules used in the camera, which includes the characterization of the photomultiplier tubes that the modules consist of. For this work, we collaborate with the Institute of Physics at the University of Zürich and the MPI-K Heidelberg. We contribute to the Gamma-ray Cherenkov Telescope (GCT) camera concept for the Small-Size Telescopes (SSTs) for CTA by developing fast readout electronics for the so-called TARGET ASIC chip. We are involved in the development, testing, and integration of the readout chip. This work is carried out together with groups at Oxford University, Leicester University, the University of Amsterdam, MPI-K Heidelberg as well as groups in the US and Japan. 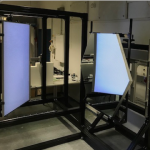 The production and testing of telescope mirror facets is an organizational and logistical challenge. We pursue two different methods for the precise characterization of the mirrors for the different telescopes planned in CTA, namely the optical 2f-method and phase measuring deflectometry (PMD).

We contribute to the development of two open-source software packages — ctools and GammaPy — that are both proposed for the analysis of data that will be collected with CTA.