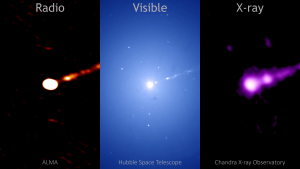 In April 2019, scientists released the first image of a black hole in the galaxy M87 using the Event Horizon Telescope (EHT). However, that remarkable achievement was just the beginning of the science story to be told. Astrophysicists from ECAP contributed to this global effort.

Data from 19 observatories are being released that promise to give unparalleled insight into this black hole and the system it powers, and to improve tests of Einstein’s General Theory of Relativity.

“We knew that the first direct image of a black hole would be groundbreaking,” said Kazuhiro Hada of the National Astronomical Observatory of Japan, a co-author of a new study being published in The Astrophysical Journal Letters to describe the large set of data. “But to get the most out of this remarkable image, we need to know everything we can about the black hole’s behavior at that time by observing over the entire electromagnetic spectrum.”

The immense gravitational pull of a supermassive black hole can power jets of particles that travel at almost the speed of light across vast distances. M87’s jets produce light spanning the entire electromagnetic spectrum, from radio waves to visible light to gamma rays. This pattern is different for each black hole. Identifying this pattern gives crucial insight into a black hole’s properties (for example, its spin and energy output), but this is a challenge because the pattern changes with time.

Scientists compensated for this variability by coordinating observations with many of the world’s most powerful telescopes on the ground and in space, collecting light from across the spectrum. This is the largest simultaneous observing campaign ever undertaken on a supermassive black hole with jets.

Beginning with the EHT’s now iconic image of M87, a new video takes viewers on a journey through the data from each telescope. Each consecutive frame shows data across many factors of ten in scale, both of wavelengths of light and physical size. The sequence begins with the EHT image of the black hole in M87 released in April 2019 (the data was obtained in April 2017). It then moves through images from other radio telescope arrays from around the globe, moving outward in the field of view during each step. (The scale for the width of squares is given in light years in the bottom right hand corner). Next, the view changes to telescopes that detect visible light (Hubble and Swift), ultraviolet light (Swift), and X-rays (Chandra and NuSTAR). The screen splits to show how these images, which cover the same amount of the sky at the same time, compare to one another. The sequence finishes by showing what gamma-ray telescopes on the ground including H.E.S.S., and Fermi in space, detect from this black hole and its jet.

Each telescope delivers different information about the behavior and impact of the 6.5-billion-solar-mass black hole at the center of M87, which is located about 55 million light-years from Earth.

“There are multiple groups eager to see if their models are a match for these rich observations, and we’re excited to see the whole community use this public data set to help us better understand the deep links between black holes and their jets,” said co-author Daryl Haggard of McGill University in Montreal, Canada.

The data were collected by a team of 760 scientists and engineers from nearly 200 institutions, spanning 32 countries or regions, and using observatories funded by agencies and institutions around the globe. The observations were concentrated from the end of March to the middle of April 2017.

“This incredible set of observations includes many of the world’s best telescopes,” said co-author Juan Carlos Algaba of the University of Malaya in Kuala Lumpur, Malaysia. “This is a wonderful example of astronomers around the world working together in the pursuit of science.”

The first results show that the intensity of the light produced by material around M87’s supermassive black hole was the lowest that had ever been seen. This produced ideal conditions for viewing the ‘shadow’ of the black hole, as well as being able to isolate the light from regions close to the event horizon from those tens of thousands of light-years away from the black hole.

The combination of data from these telescopes, and current (and future) EHT observations, will allow scientists to conduct important lines of investigation into some of astrophysics’ most significant and challenging fields of study. For example, scientists plan to use these data to improve tests of Einstein’s Theory of General Relativity. Currently, uncertainties about the material rotating around the black hole and being blasted away in jets, in particular the properties that determine the emitted light, represent a major hurdle for these GR tests.

A related question that is addressed by today’s study concerns the origin of energetic particles called “cosmic rays,” which continually bombard the Earth from outer space. Their energies can be a million times higher than what can be produced in the most powerful accelerator on Earth, the Large Hadron Collider. The huge jets launched from black holes, like the ones shown in today’s images, are thought to be the most likely source of the highest energy cosmic rays, but there are many questions about the details, including the precise locations where the particles get accelerated. Because cosmic rays produce light via their collisions, the highest-energy gamma rays can pinpoint this location, and the new study indicates that these gamma-rays are likely not produced near the event horizon—at least not in 2017. A key to settling this debate will be comparison to the observations from 2018, and the new data being collected this week.

“Understanding the particle acceleration is really central to our understanding of both the EHT image as well as the jets, in all their ‘colors’,” said co-author Sera Markoff, from the University of Amsterdam. “These jets manage to transport energy released by the black hole out to scales larger than the host galaxy, like a huge power cord. Our results will help us calculate the amount of power carried, and the effect the black hole’s jets have on its environment.”

The release of this new treasure trove of data coincides with the EHT’s 2021 observing run, which leverages a worldwide array of radio dishes, the first since 2018. Last year’s campaign was cancelled because of the COVID-19 pandemic, and the previous year was suspended because of unforeseen technical problems. This very week, EHT astronomers are targeting the supermassive black hole in M87 again, the one in our Galaxy (called Sagittarius A*), together with several more distant black holes for six nights. Compared to 2017, the array has been improved by adding three more radio telescopes: the Greenland Telescope, the Kitt Peak 12-meter Telescope in Arizona, and the Northern Extended Millimeter Array (NOEMA) in France.

“With the release of these data, combined with the resumption of observing and an improved EHT, we know many exciting new results are on the horizon,” said co-author Mislav Baloković of Yale University. 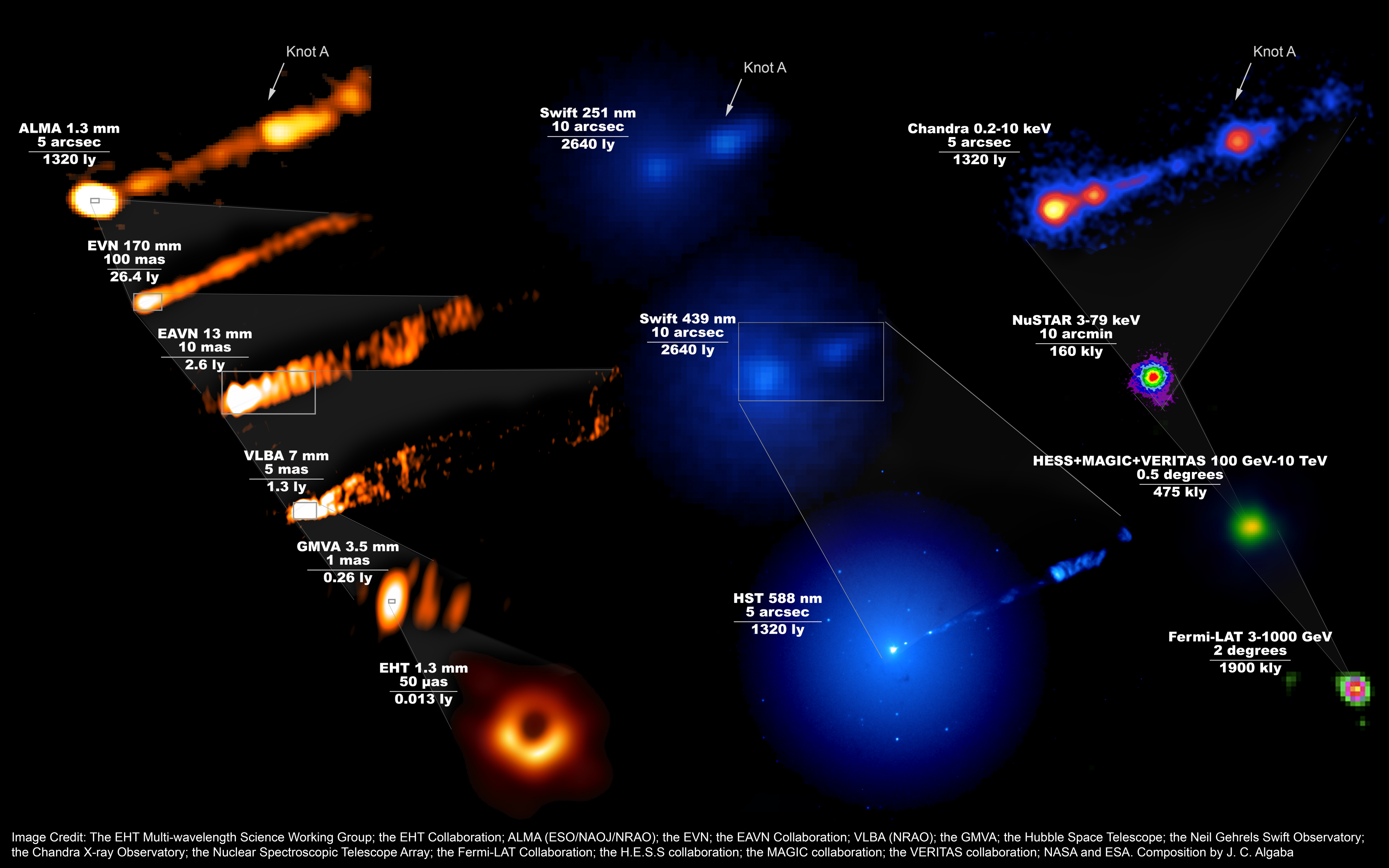 Composite image showing how the M87 system looked, across the entire electromagnetic spectrum, during the Event Horizon Telescope’s April 2017 campaign to take the iconic first image of a black hole. Requiring 19 different facilities on the Earth and in space, this image reveals the enormous scales spanned by the black hole and it forward-pointing jet, launched just outside the event horizon and spanning the entire galaxy.
(Credit: the EHT Multi-Wavelength Science Working Group; the EHT Collaboration; ALMA (ESO/NAOJ/NRAO); the EVN; the EAVN Collaboration; VLBA (NRAO); the GMVA; the Hubble Space Telescope, the Neil Gehrels Swift Observatory; the Chandra X-ray Observatory; the Nuclear Spectroscopic Telescope Array; the Fermi-LAT Collaboration; the H.E.S.S. collaboration; the MAGIC collaboration; the VERITAS collaboration; NASA and ESA. Composition by J.C. Algaba.)

The EHT Multi-wavelength (MWL) Working Group is a collective of EHT Collaboration members and external partners working together to ensure broadband MWL coverage during EHT campaigns, to maximize science output. The EHT collaboration involves more than 300 researchers from Africa, Asia, Europe, North and South America. The international collaboration is working to capture the most detailed black hole images ever obtained by creating a virtual Earth-sized telescope. Supported by considerable international investment, the EHT links existing telescopes using novel systems — creating a fundamentally new instrument with the highest angular resolving power that has yet been achieved.