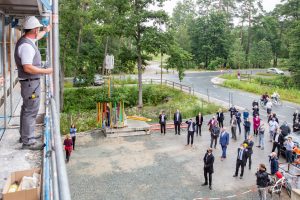 The shell of the ECAP Laboratoryhas been completed. After around eleven months of construction, the invited guests celebrated the topping-out ceremony together with Bavaria’s State Secretary in the Bavarian State Ministry for Housing, Building and Transport, Klaus Holetschek and Bavaria’s Interior Minister, Joachim Herrmann.

The federal government and the Free State are investing more than 39 million euros in the Erlangen research location. The Friedrich-Alexander University Erlangen-Nuremberg (FAU) can look forward to a new building that creates optimal working conditions in the pioneering research field of astroparticle physics.

The award-winning design by the architects Glass Kramer Löbbert BDA and Dichter Architekturgesellschaft mbH from Berlin combines optimal laboratory conditions and high functionality with a great quality of stay. Communication zones and numerous insights and outlooks will enable researchers to exchange ideas in an open and active manner.

State Secretary Holetschek: “Top research needs optimal conditions. With the new research building, we are not only strengthening Erlangen and Bavaria as a leading science location, we are also creating a perfect environment for researchers, students and employees on campus. ”

The completion of the flagship project under the direction of the Erlangen-Nuremberg State Building Office is planned for the end of 2021.

For Science Minister Bernd Sibler, the new research building will significantly improve the infrastructure for the internationally pioneering scientific work at ECAP. He emphasized: “With this new building, we are expanding the attractiveness of Erlangen’s research excellence. In this way, we can make Bavaria as a research location even more attractive to scientists from all over the world. For the Erlangen-Nuremberg metropolitan region and for Bavaria as a whole as a science location, ECAP is an outstanding advertisement. From here we break into new dimensions, science means future! ”

In the immediate vicinity of the institutes of the Department of Physics at FAU and the Max Planck Institute for the Physics of Light, the building will in future combine laboratories, workshops and offices with representative rooms on the ground floor and communication zones on all levels on around 3,500 square meters of usable space. The construction of this research building by the Free State of Bavaria, represented by the State Building Authority of Erlangen-Nuremberg, is intended to secure and strengthen the outstanding position of the ECAP in the long term. This is funded by the federal government within the framework of top-level funding according to Article 91b of the Basic Law.