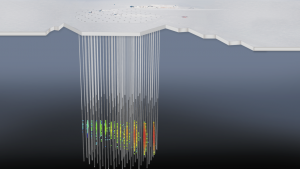 Neutrino IC170922 in IceCube Credit: IceCube Collaboration/NSF The IceCube Neutrino Observatory encompasses a cubic kilometer of pristine ice deep below Antarctica's surface and next to the NSF Amundsen-Scott South Pole Station. In this illustration, based on an aerial view near the South Pole, an artistic rendering of the IceCube detector shows the interaction of a neutrino with a molecule of ice. The display pattern is how scientists represent data on recorded light. Every colored circle represents light collected by one of the IceCube sensors. The color gradient, from red to green/blue, shows the time sequence.
12/07/2018

IceCube is a cubic-kilometre sized neutrino observatory. It detects high-energy neutrinos with 5160 photo-sensors that are installed in the deep ice at the South Pole and record the weak flashes of blue light signalling a neutrino reaction.

On September 22, 2017, IceCube issued a public alert to the astronomical community about the detection of a high-energy neutrino event. The neutrino came from the direction of a previously identified Fermi-LAT-cataloged blazar TXS 0506+056. The Fermi-LAT collaboration reported that this blazar had been in an actively flaring state for several months at the time of the neutrino detection. This initiated further follow-up observations of this blazar by different telescopes, covering electromagnetic signals from the radio to the gamma-ray regime. The coincident detection of a neutrino with electromagnetic signals, and the subsequent identification of previous neutrino emission from the same source in archival IceCube data, mark the advent of multi-messenger astronomy.

With participations in IceCube, in the current and future neutrino telescope projects ANTARES and KM3NeT in the Mediterranean Sea, in the gamma-ray observatory H.E.S.S. and its future successor CTA, as well as intense research activities in X-ray astronomy, ECAP is an excellent position to lead multi-messenger astronomy to a bright future.