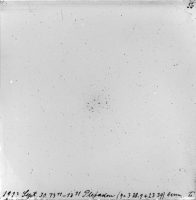 One of the first, still experimental photo negatives of the Dr.-Remeis-Sternwarte: the Pleiades, commonly known as the Seven Sisters, taken on September 30, 1913 on a 12 by 12 inches large photo plate. Astronomers basically use negatives for their sky mapping, so the celestial objects appear as black dots. (Image: FAU / APPLAUSE)
25/10/2018

For more than 100 years astronomy has used photography to explore planets, stars, galaxies and other astronomical objects. At the end of the 1980s, digital receivers almost completely replaced the classic photographic plates. Thanks to their lifetimes of more than 100 years, the latter are above all very reliable storage. Hundreds of thousands of such astronomical images were dormant in the archives of German observatories, waiting for their second, now digital, scientific evaluation with modern computer software. The Dr. Remeis-Sternwarte of the FAU alone has more than 40,000 photographic plates of observations dating from 1913 to 1976. These treasures can only be fully analyzed by digitization. The information contained in the old photographic images allows us to look back into the past decades and with the aid of modern computer programs we can measure hundreds of millions of stars much more accurately and objectively. The availability of data over decades allows scientists to investigate long-term phenomena. Together with the Hamburg University, the Leibniz Institute for Astrophysics in Potsdam (AIP), and the University of Tartu (Estonia), the FAU astronomers digitized and calibrated 70000 plates in the last five years, from which three and a half billion measurements of positions and brightnesses of celestial objects were extracted and made public through the web archive APPLAUSE in the 3rd data release as of October 24, 2018, ready for the scientific analysis by the international community of astronomers.

See also the press releases at: