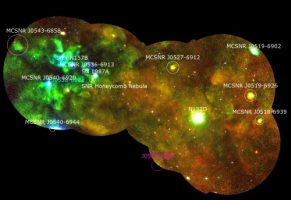 Mosaic of the EDR observations of the Large Magellanic Cloud. On the left there is bright X-ray emission from the Tarantula nebula and from various interstellar superbubbles and supernova remnants. The bright source on the right side is the supernova remnant N132D, which was caused by the core-collapse supernova explosion of a massive star. In addition, diffuse X-ray emission from million-degree plasma in the interstellar medium is seen in the entire field of view. (Image: © eROSITA collaboration, Sasaki et al.)
02/07/2021

The German eROSITA consortium, including researchers from FAU, has released the first set of data taken by the eROSITA X-ray telescope, which can scan the entire sky in the X-ray range. Researchers across the globe can now access data from the telescope. The early data release (EDR) is accompanied by 35 scientific papers on surveys conducted by the consortium, which will be published alongside other publications in a special issue of the journal Astronomy and Astrophysics.

The EDR comprises observations the consortium made between September and December 2019, during the calibration and performance verification phase. Since then, the eROSITA X-ray telescope has been scanning the whole sky and producing sensitive X-ray all-sky maps, and it will continue to do so until the end of 2023.

The EDR comprises almost 100 individual observations of 29 distinct fields, covering a wide range of different astronomical objects from neutron stars in our Milky Way to far-flung clusters of galaxies, and showcasing the potential and versatility of the eROSITA telescope for imaging, spectroscopy and time domain analysis.

eROSITA’s first mission: Collecting data from the supernova in the Large Magellanic Cloud

The accompanying 35 papers written by the German eROSITA Consortium mostly focus on the mini-survey called ‘eFEDS’ (the eROSITA Final Equatorial Depth Survey), but also include exciting highlights from other EDR observations and the ongoing all-sky survey.

The first light observation of eROSITA, in other words the first time the telescope recorded images, was directed at the region around the supernova SN 1987A in the Large Magellanic Cloud (LMC). Together with other EDR observations, these data revealed a complex distribution of diffuse X-ray emissions from the interstellar plasma in the LMC, the largest and the closest star-forming satellite galaxy of our Milky Way. ‘These data show us a complicated structure of the interstellar medium in the LMC in addition to a large number of bright X-ray sources’, says Prof. Dr. Manami Sasaki of Dr. Karl Remeis Observatory at FAU, chairperson of the supernova remnants/interstellar medium working group. ‘With its large field of view and the high sensitivity at energies below 2 kiloelectron volts, eROSITA is the perfect instrument to study the properties and the origin of the high-temperature interstellar plasma in our neighbouring galaxy.’

One of the calibration targets of eROSITA is the galactic globular cluster 47 Tucanae, which is located in the halo of the Milky Way (a roughly spherical area in which the galaxy is embedded) and consists of millions of old stars. ‘Over 800 X-ray sources have already been discovered in the 47 Tucanae region, the majority of which are binary systems, in other words systems in which a white dwarf or a neutron star accretes matter from a companion star,’ explains FAU astronomer Dr. Sara Saeedi, who was responsible for studying the X-ray sources in the 47 Tucanae region.

Young researchers from Bachelor’s students to young postdoctoral researchers are also involved in the analysis and publication of the eROSITA data. ‘Collaborative work between experienced senior scientists and young researchers is important and will enhance the research with new ideas,’ says Prof. Manami Sasaki, who is also the Mediator of the eROSITA consortium.

‘Apart from the ground-breaking science, another thing that makes me really proud is that roughly 40% of the papers that accompany the data release are led by women scientists,’ adds Dr. Mara Salvato from the Max Planck Institute for Extraterrestrial Physics (MPE) and eROSITA spokesperson. ‘The eROSITA collaboration will keep working towards making scientific opportunities available to all.’