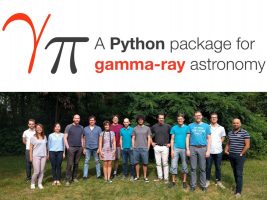 The analysis of observational data in gamma-ray astronomy requires specialised analysis methods and software to reach the highest possible sensitivity in the presence of the background ’noise’ of charged cosmic rays. Traditionally both the data and corresponding analysis software belonged to the collaborations operating the instruments and was often not publicly available. However, the future Cherenkov Telescope Array (CTA) will be operated as an open observatory, with public access to the observational data for scientific users, together with openly accessible analysis software.

In the past decade the programming language Python has been established as a new standard in the analysis of scientific data and a whole ecosystem of open-source software packages has developed around it. Those software packages cover all fields, such as Biology, Geoscience, Chemistry and Astronomy, and are used by millions of scientists world-wide for their daily work. Scientists not only save time by sharing software but also use common software projects to exchange with colleagues and collaborate across multiple fields.

Inspired by this movement, scientists from Germany and other European countries have developed an open source Python package for the analysis of gamma-ray data named Gammapy. Gammapy was written as a prototype for future CTA science user tools, but also with a vision for a common analysis software, shared by different communities in gamma-ray astronomy. With a common analysis software, it is possible furthermore to combine the data from multiple instruments for more precise measurements overall. Gammapy is openly developed on the platform GitHub. It has grown constantly and seen contributions from ~70 different scientists from ~10 different countries over time. In the past years, Gammapy has already been used successfully for the analysis of data from existing imaging atmospheric Cherenkov telescopes such as H.E.S.S., MAGIC and VERITAS, and is beginning to be used for particle detectors such as HAWC.

Scientist from ECAP support Gammapy development since several years: They are active in managing the Gammapy project and at the forefront of establishing Gammapy in the analysis of the most complex gamma-ray sources, using data from the H.E.S.S. gamma-ray telescopes, the Fermi-LAT gamma-ray space telescope, HAWC, and — in the future — the KM3NeT neutrino observatory.

On June 1, 2021, Gammapy was adopted by the CTA Observatory as the official “CTA Science Tools”. The successful proposal was formally supported by partners from Germany, France, Spain and Italy. With this role Gammapy will be used by many more gamma-ray astronomers in future and help to simplify combining data from multiple observatories and help to establish a new standard of open and reproducible scientific analysis in gamma-ray astronomy.