GW 170817: The birth of multi-messenger astrophysics 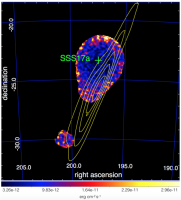 On August 17, 2017, the gravitational wave interferometers Advanced Ligo and Advanced Virgo recorded a signal from the merger of a binary neutron star system, a type of signal that had never been seen before. Complementing this exciting discovery, dozens of telescopes worldwide observed the sky, and a large number of them were able to record signals from the same event. ECAP scientists who are exploring the sky with the Fermi-LAT and H.E.S.S. gamma-ray instruments and the IceCube and ANTARES neutrino telescopes, contributed successfully to this follow-up program.

Alerted by the observation of the gravitational wave event, and by a spatially coincident gamma-ray burst recorded by the Fermi Gamma Ray Burst Monitor less than two seconds after, the H.E.S.S. telescopes located in Namibia were the first to observe the position of the merger in high-energy gamma rays, no later than five hours after the event. Monitoring of the event continued for several days, but no significant gamma-ray emission in the teraelectronvolt energy range has been found. Similarly, the ANTARES and IceCube neutrino telescopes and the in-orbit gamma ray telescope Fermi-LAT searched in their data for neutrino and high-energy gamma-ray emission coincident with the event, but only upper limits on a potential signal are reported. Importantly, these high-energy observations can be used to constrain, for the first time, the production of non-thermal, high energy emission from the merger of a confirmed binary neutron star system.

This impressive campaign, with coordinated observations in gravitational waves, in photons across the full electromagnetic spectrum, and in neutrinos, clearly sets a milestone towards establishing multi-messenger astrophysics.