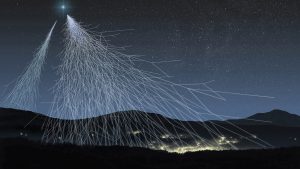 Artistic impression of an extensive air shower. A single UHECR interacts with the atmosphere generating a cascade of billions of secondary particles. (Image Credit: ASPERA/Novapix/L. Bret)
24/08/2022

Ultra-high-energy cosmic rays are the most energetic known messengers of the universe and can be used for testing the frontiers of physics. In particular, they are a powerful tool for searching for imprints of Lorentz invariance violation (LIV). ECAP scientist Dr. Rodrigo Guedes Lang has recently published a paper review on how these particles are used for testing whether we have already achieved a regime in which relativity is not valid anymore.

Earth is constantly being hit by cosmic rays, very energetic particles coming from outer space. The most energetic of them, known as ultra-high-energy cosmic rays (UHECR), come from outside of our own galaxy and reach energies up to 10 million (10,000,000) times higher than the highest energy we can achieve with human-made technology, which is achieved at the Large Hadron Collider (LHC). These particles are thus a tool of paramount importance for looking at and understanding the extremes of the universe, as well as for testing the frontiers of physics itself.

Their flux, however, is low for the highest energies, going even below 1 particle per km2 per century – this means, if one would be willing to capture a single UHECR, they would have to spend on average a whole century monitoring an area as large as 140 football fields! Then, how do we detect and study them? By combining two main approaches: taking advantage of our atmosphere and building huge experiments!

Our atmosphere protects us from this cosmic radiation and, as a result, provides astrophysicists with the needed tool for studying particles with such a low flux. Once a UHECR reaches Earth, it will interact with a nucleus of the atmosphere, initiating a so-called extensive air shower (EAS): the initial particle creates a large number of less energetic particles, which then create even more less energetic particles and so on in a cascade leading to up to 10 billion (10,000,000,000) particles. This pool of secondary particles covers an area of tens of square kilometers (thousands of football fields!) and could be detected and used to reconstruct the information about the primary particle, such as its energy, direction, and mass. This leads to the second approach: building huge experiments! There are currently two main UHECR detectors: the Telescope Array located in the United States of America and covering an area of ~775 km2, and the Pierre Auger Observatory, located in Argentina and covering an area of ~3,000 km2 (more than three times the area of the city of Berlin!).

But why are these particles important for exploring the frontiers of physics itself?

Newtonian physics describes the events of daily life and even astronomical measurements quite well. Nevertheless, by the end of the 19th century, humankind has reached such technological advances that allowed us to measure physical regimes not explained by Newtonian physics. At the beginning of the following century, this regime was successfully described by the theory of relativity freshly developed by Albert Einstein. But if Newtonian physics had a regime of validity, beyond which a more complex theory was needed, should we also expect a regime of limited validity for Einstein’s relativity and, if so, can we already reach its confines?

There are already several high-energy and grand unification theoretical models which propose this regime, in particular by either accommodating or demanding some level of Lorentz invariance violation (LIV), breaking one of the main pillars of relativity. This effect, however, is expected to be suppressed up to the very highest energies (otherwise that would have already been seen). If we want to look for an effect that may only be present in very high energies, why not use the most energetic events known in the Universe?

In a review paper recently published in the Universe journal, ECAP scientist Dr. Rodrigo Guedes Lang and collaborators describe the latest efforts of the astrophysical community in using UHECR for searching for signals of Lorentz invariance violation.

If LIV is present, effects that are forbidden by “current” physics may be allowed, such as a difference in the speed of light for photons of different energies, decay of stable particles, shifts in the kinematics of particle interactions, and others. These “unexpected” effects would modify the propagation of UHECR through the extragalactic medium and could, in principle, be seen in the data measured by experiments on Earth. 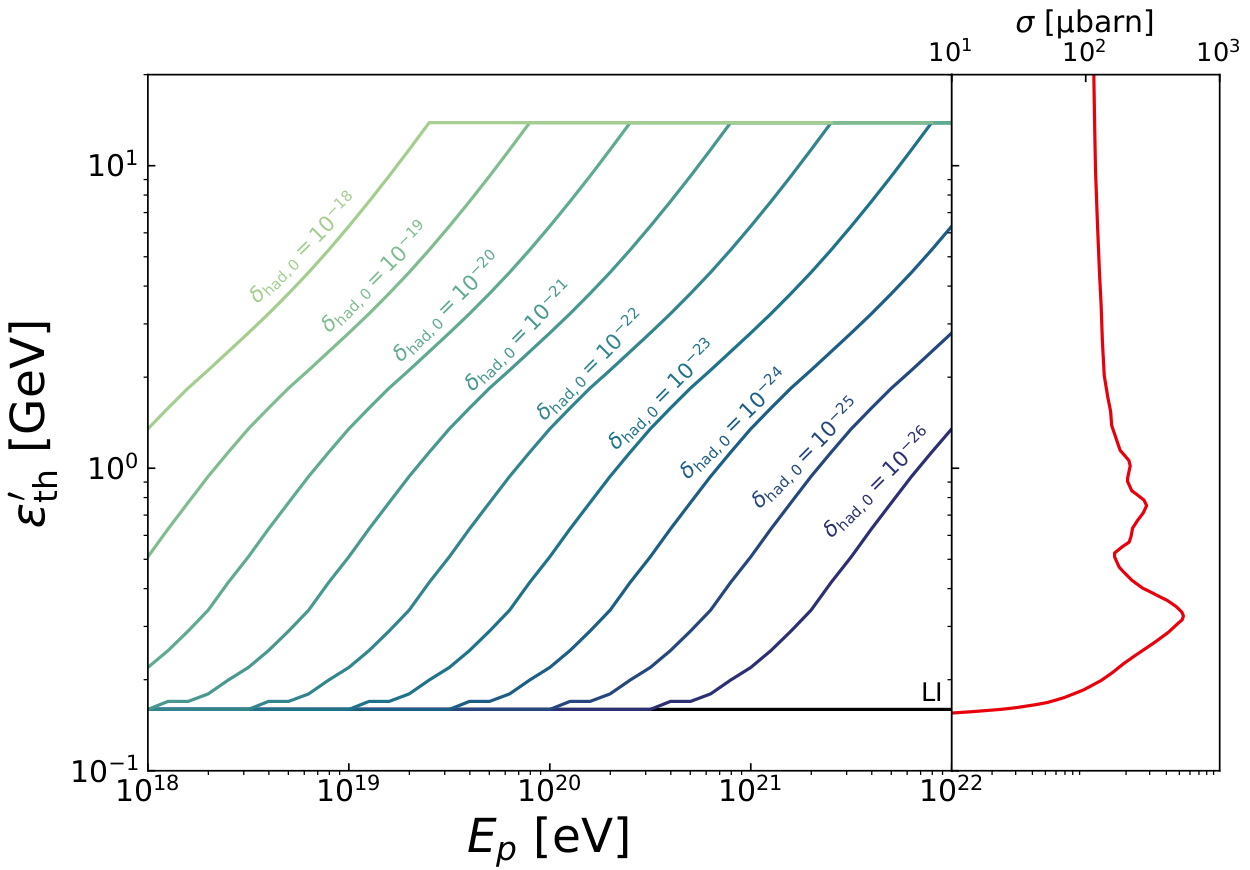 In the review, the analytical propagation of UHECR and ultra-high-energy photons in a LIV scenario is presented, showing that, if LIV is present, UHE particles are expected to interact less while propagating through the Universe, which would lead to an increased number arriving on Earth. Further on, the possibility of searching for this increase in different astrophysical datasets is discussed and a compilation of recent works is presented.

No clear signal of LIV is found in astrophysical data. Nevertheless, this is not a frustrating result! The lack of LIV signal means that we can expand the region in which we know that relativity is still valid even further! Finally, the review discusses the future of the field, highlighting the possibility of increasing the robustness of the results as well as the possibility of expanding the search with future experiments.

We can, therefore, use the most extreme particles we know in the universe to test how far the frontiers of the known physics can go!