The Machine learning lab is a multidisciplinary collaboration among gamma-ray, neutrino astrophysics and particle physics groups at ECAP. We develop applications of machine learning methods for data analysis and interpretations of astrophysical models.

Machine learning and, especially, deep learning have had great success in various domains of human knowledge, such as image recognition, language translation, and autonomous driving. In real-life applications as well as in scientific research, machine learning methods are used to analyze large and complex datasets. Since the algorithms learn from data, they are expected to become more  precise as more data is collected. This will lead to a better analysis and interpretation of the data. Future observatories for photons (from radio to gamma rays), neutrinos, and gravitational waves will provide orders of magnitude more data than is currently available, which will bring new challenges but also great opportunities. The development of machine learning methods is therefore crucial for future scientific applications. 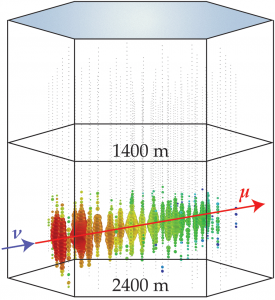 The IceCube experiment measures astrophysical neutrinos in the energy range between 100 GeV and several PeV. The neutrinos convert into charged particles, such as electrons or muons, which emit Cherenkov light as they propagate through the ice. This Cherenkov light is used to measure the arrival direction of the neutrinos and to estimate their energy. In ECAP we use deep convolutional neural networks and, in particular,  long-short term memory (LSTM) networks to reconstruct the neutrino arrival direction and subsequent energy depositions in the ice. We also focus on the uncertainty estimation of the network predictions. 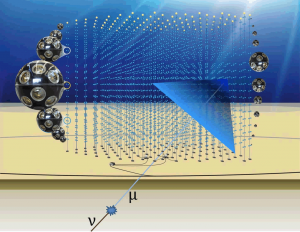 The ANTARES and KM3NeT experiments measure the flux of high energy neutrinos by searching the conversion of neutrinos into charged particles in the deep sea water. The charged particles created by neutrinos emit Cherenkov light in the water, which is detected by photomultipliers. At ECAP we use convolutional deep neural networks to reconstruct the energy and the direction of the neutrinos. 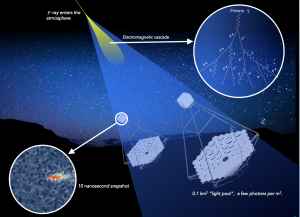 High energy gamma rays create showers of particles in the atmosphere, which emit Cherenkov light as they propagate towards the Earth. H.E.S.S. telescopes and the future Cherenkov Telescope Array (CTA) measure the astrophysical gamma rays by detecting the Cherenkov light from the atmospheric showers. At ECAP we use deep convolutional neural networks to separate the showers created by gamma rays from the showers created by cosmic ray protons and nuclei (which are the main backgrounds for the gamma ray flux). We also use deep networks to reconstruct the energy and the direction of the gamma rays and to compress the images by detecting which pixels are likely to contain the signal and which ones contain the noise.

The EXO experiments search for neutrino-less double beta decay. If observed, such decays will prove that neutrinos are their own antiparticles. The experiment observes double beta decays of Xenon 136 isotope. The neutrino-less decays have to be distinguished from the usual decays including neutrinos and radioactive background events. In ECAP we use deep neural networks to reconstruct the energy deposited in the electron pair as a result of the decay, which is a crucial part in separating the neutrino-less and the usual double-beta decays. We also use deep neural networks to distinguish double beta decays from the background radioactive decays and generative adversarial networks to improve the Monte Carlo simulations of the events.